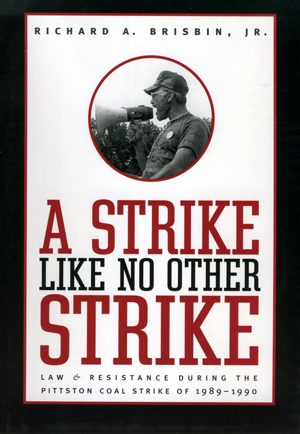 The miners’ strike against Pittston Coal in 1989–1990, which spread throughout southwestern Virginia, southern West Virginia, and eastern Kentucky, was one of the most important strikes in the history of American labor, and, as Richard Brisbin observes, “one of the longest and largest incidents of civil disorder and civil disobedience in the United States in the second half of the twentieth century.” The company aggressively sought to break the strike, and workers and their families used a variety of tactics—lawful and unlawful—to resist Pittston’s efforts as the situation quickly turned ugly.

In A Strike like No Other Strike: Law and Resistance during the Pittston Coal Strike of 1989–1990, Richard Brisbin offers a compelling study of the exercise of political power. In considering the legal significance of the strike, Brisbin asks the larger question of whether even extreme transgression or resistance can fracture the “imagined coherence of the law.” He shows how each party in the strike invoked the law to justify its actions while attacking those of the other side as unlawful. In the end, both sides lost; although the US Supreme Court ultimately ruled in favor of the union, most of the strikers faced elimination of their jobs and an ongoing struggle for pensions and health benefits.

Richard A. Brisbin Jr. is an associate professor of political science at West Virginia University. He is the author of Justice Antonin Scalia and the Conservative Revival.

“Richard Brisbin’s excellent book sits at the intersection of law, political science, sociology, and history . . .  Brisbin is utterly convincing in his conclusion that the miners were in the end reduced to Arendtian animals laborans who worked only for sustenance rather than for the joy of creation and integration into a community.”
Julie Novkov, Law and Politics Book Review

“The book brims with insights into the history of the Pittston strike and into a miner's way of life . . . [Brisbin] describes hanging out at the picketing shacks, protests led by Jesse Jackson and Cesar Chavez, militant priests and nuns, and mine takeovers, complete with dancing and live country music.”
Henry S. Cohn, The Federal Lawyer

“Brisbin does an admirable job not only of conveying the historical events and their context, but also of making explicit the evolution and development that occurred on both sides of the struggle.”
Gordon Simmons, Appalachian Heritage

“It is clear that Brisbin’s personal experience with the 'American worker' informs his interpretation of the Pittston coal strike, and he leaves the reader at once inspired and dismayed by the subjectivity of American law.”
Virginia Libraries

“This excellent study describes the 1989–1990 Pittston coal strike . . . Brisbin avoids offering a traditional narrative in favor of a deeper analysis of the dispute that explores the strike’s significance as an exercise in civil disobedience and oppositional culture . . . Brisbin is to be commended for dissecting what happened here with an eye toward its wider implications.”
Richard P. Mulcahy, Journal of American History

“A comprehensive account and analysis of the lengthy Pittston coal strike of 1989—1990, focusing on the effects of the law and its apparatus on the actions of Pittston Coal, the United Mine Workers union, judges, and the miners themselves.”
Choice

“This book tells the story of a very important but little known recent episode in the history of labor and its unfortunate fate at the hands of corporate power. Brisbin presents a powerful but balanced interpretive account informed by cutting edge theory and compelling judgment. I know of no other work that better develops theoretically and illustrates empirically the complex, multi-dimensional workings of law as does Brisbin’s study of the United Mine Workers’ tragic battle with Pittston.”
Michael McCann, University of Washington

“A useful read for any student of the Appalachian region.”
Mark S. Myers, West Virginia History

“Richard Brisbin has done a service in putting together this book . . . a welcome new resource.”
Fran Ansley, Journal of Appalachian Studies