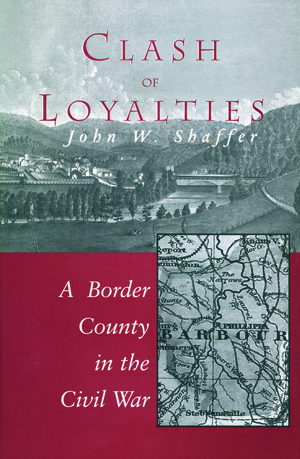 As a border county in a border state, Barbour County, West Virginia, felt the full terror and tragedy of the Civil War. The wounds of the Civil War cut most bitterly in the border states, that strip of America from Maryland to Kansas, where conflicting loyalties and traditions ripped apart communities, institutions, and families. Barbour County, in the mountainous Northwest of (West) Virginia, is a telling microcosm of the deep divisions which both caused the war and were caused by it. By examining and interpreting long-ignored documents of the times and the personal accounts of the people who were there, Clash of Loyalties offers a startling new view of America’s most bitter hour. Nearly half of the military-age men in the county served in the armed forces, almost perfectly divided between the Union and the Confederacy. After West Virginia split with Virginia to rejoin the Union, Confederate soldiers from the regions could not safely visit their homes on furlough, or even send letters to their families. The county’s two leading political figures, Samuel Woods and Spencer Dayton, became leaders of the fight for and against secession, dissolved their close personal friendship, and never spoke to one another again. The two factions launched campaigns of terror and intimidation, leading to the burning of several homes, the kidnapping of a sheriff, the murder of a pacifist minister, and the self-imposed exile of many of the county’s influential families. The conflicting loyalties crossed nearly all social and economic lines; even the county’s slave owners were evenly divided between Union and Confederate sympathies. With a meticulous examination of census and military records, geneologies, period newspapers, tax rolls, eyewitness accounts, and other relevant documents, Clash of Loyalties presents a compelling account of the passion and violence which tore apart Barbour County and the nation.

John W. Shaffer earned a PhD in history from UCLA. He has taught at California State University at Chico. He is the author of Family and Farm: Agrarian Change and Household Organization in the Loire Valley, 1500–1900, as well as numerous articles in journals and books. Shaffer is currently vice president of United Mercantile Agencies in San Francisco.

“ . . . to my knowledge no Civil War scholar to date has documented patterns of local conflict so meticulously, and those seeking to understand Appalachia’s Civil War will find in this monograph an effective model for continued exploration.”
Robert Tracy McKenzie, Journal of Appalachian Studies