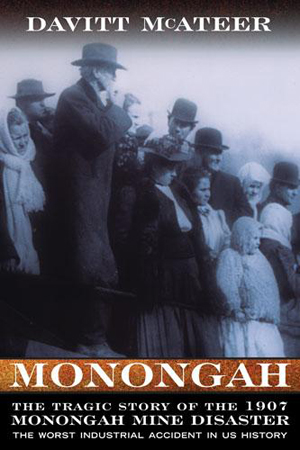 Davitt McAteer
With an introduction by
Robert B. Reich

New paperback edition with an introduction by Robert B. Reich

Monongah: The Tragic Story of the 1907 Monongah Mine Disaster documents the events and conditions that led to the worst industrial accident in the history of the United States. This mining accident claimed hundreds of lives on the morning of December 6, 1907, and McAteer, an expert on mine and workplace health and safety, delves deeply into the economic forces and social-political landscape of the mining communities of north central West Virginia to expose the truth behind this tragedy. After nearly thirty years of exhaustive research, McAteer determines that close to 500 men and boys—many of them immigrants—lost their lives that day, leaving hundreds of women widowed and more than one thousand children orphaned.

The tragedy at Monongah led to a greater awareness of industrial working conditions, and ultimately to the Federal Coal Mine Health and Safety Act of 1969, which McAteer helped to enact. This new paperback edition includes an introduction by Robert B. Reich, Chancellor’s Professor of Public Policy at the University of California at Berkeley and Secretary of Labor during the Clinton administration.

Davitt McAteer is internationally recognized as an expert on mine and workplace health and safety. He worked with consumer advocate Ralph Nader to help enact the landmark 1969 Federal Coal Mine Health and Safety Act. During the 1970s, he led the safety and health programs of the United Mine Workers of America and founded the Occupational Safety and Health Law Center. During his career, Mr. McAteer has consulted and lectured extensively on health and safety issues for governments, unions, and corporations in South Africa, China, Australia, Chili, Peru, and elsewhere. From 1994 to 2000, he served as assistant secretary for Mine Safety and Health at the US Department of Labor under President Clinton and for nearly two years, 1996 to 1997, also served as acting solicitor of the US Department of Labor. Shortly after the 9/11 terrorist attack on the World Trade Center in 2001, he was called on as an advisor to the recovery efforts at Ground Zero, consulting with union representatives of equipment operators and subway workers. Mr. McAteer served as vice president of Wheeling Jesuit University from 2005 until his retirement in June 2012.

On four occasions, at the request of two West Virginia governors, he has conducted independent investigations into mine disasters and accidents. Most recently in April of 2010, then West Virginia Governor Joe Manchin III requested that McAteer conduct an independent investigation into the Upper Big Branch mine disaster, the largest coal mine disaster in the United States in forty years, which resulted in the deaths of twenty-nine miners. He has testified before Congress on safety and health issues on numerous occasions.

Davitt McAteer maintains a law office and lives in Shepherdstown, West Virginia, with his wife Kathryn.

“McAteer skillfully analyzes the tragedy, examining players on the company side from the upper levels of the rich and powerful to the mine supervision and operations level, while giving equal weight and voice to the immigrant groups that provided the vast majority of the victims. . . . It is fortuante that a man of David McAteer’s caliber undertook to tell the tragic story.”
Charles McCollester, West Virginia History: A Journal of Regional History

“Monongah is a major scholary work, and another in a series of WVU Press offerings that tells previously untold stories about the people who really built West Virginia, and often suffered in doing so.”
Ken Ward, Charleston Gazette-Mail

“A compelling, cautionary tale of avarice and corruption, as well as a testament to the ultimate resilience of exploited people.”
Shirley Stewart Burns, the Journal of Southern History

“McAteer’s work is undeniably significant and his extensive research is evident.”
Joshua Stahlman, Pennsylvania History: A Journal of Mid-Atlantic Studies