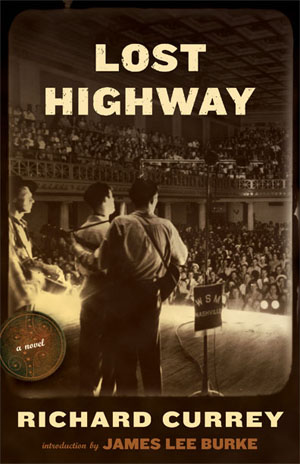 Richard Currey's Lost Highway has attracted a legion of admirers since its initial publication in 1997. The book depicts the epic struggle of an ordinary person living his dreams and following his passion. Lost Highway is the story of Sapper Reeves, a gifted country musician from the small town of Maxwell, West Virginia. Sapper’s story covers the events of more than half a century, from his birth in a poor coal mining town through his travels on the back roads of Appalachia in search of recognition and respect. Along the way, Sapper’s embattled love for his wife and struggle to come to terms with his combat-wounded son form the basis of his artistic and personal redemption.

Richard Currey was born in Parkersburg, West Virginia. He served from 1968 to 1972 in the U.S. Navy, and afterwards attended Howard University in Washington, D.C. In 1980 he published his first book, Crossing Over: A Vietnam Journal, which went on to earn a Pulitzer Prize nomination. Currey’s international breakthrough came with his first novel, Fatal Light, short-listed for the 1988 PEN/Hemingway Award for Best First Novel. A winner of the Vietnam Veterans of America's Excellence in the Arts Award, Fatal Light was published in twelve languages. Lost Highway has been hailed as a definitive work of Appalachian fiction.

"Currey has an unerring eye for detail, for the everyday wonders of life."
Edvins Beitiks, The San Francisco Chronicle

"Lost Highway is a book to linger over, full of passages worth re-reading, moments flashing with life, and, like a good country song, filled with spaces where we see our lives reflected."
The Boston Globe

"This enthralling narrative spanning a half—century in the life of a country musician traces the years and miles that divide father and son, husband and wife: the same years that, ironically, will serve to reconcile them in the end. Lost Highway takes us someplace better than we could have planned for ourselves—our task is to grow enough to recognize it. The book's hero Sapper Reeves calls his songs 'small legends of the miles.' Lost Highway, too, is a legend of the miles—and no small one."
The Seattle Times

"Outstanding...Currey strums the language in Lost Highway, capturing with haunting poignance the nuances of hillbilly dialects, rough-edged roadhouses, and the deafening silences of estrangement. And Currey never falls into cliche: his powerfully wrought images serve as a barrier to sentimentality in a novel that travels down long emotional backroads and hills of desperation, where endurance rides shotgun for melancholy...this exceptional paean to American music echoes with the full, smoky vocals of Currey's lyricism."
Kansas City Star

"This novel by the much—praised Currey is as eloquently piercing and deeply American as a classic folk ballad...told in haunting prose that allows Lost Highway to emerge on the page like music itself."
Publisher's Weekly

"When Richard Currey writes fiction, he speaks the truth. The poetry of his language, his wisdom, his compassion, sets us free. His journeys into the human heart are tiny miracles ... and when we finish Lost Highway we do so with a mysterious sense of revelation. The final chapters of this novel stir the heart and mind in ways only the best fiction can achieve."
Dallas Morning News

"Richard Currey's Fatal Light, one of the best novels written about the Vietnam War, revealed the same unerring eye for detail and the everyday wonders of life that Currey brings to his second novel Lost Highway... Currey's writing has a dignity and a studied understatement that is missing in most contemporary novels."
San Francisco Chronicle

"Richard Currey is one of those gems whose writing, like Venus in the night sky, seems to shine brighter than others. The more you read Lost Highway, the more his writing takes on a mesmerizing glow..."
Albuquerque Journal