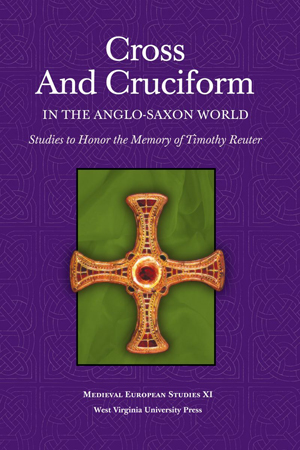 Cross and Cruciform in the Anglo-Saxon World: Studies to Honor the Memory of Timothy Reuter is edited by Sarah Larratt Keefer, Karen Louise Jolly, and Catherine E. Karkov and is the third and final volume of an ambitious research initiative begun in 1999 concerned with the image of the cross, showing how its very material form cuts across both the culture of a society and the boundaries of academic disciplines—history, archaeology, art history, literature, philosophy, and religion—providing vital insights into how symbols function within society. The flexibility, portability, and adaptability of the Anglo-Saxon understanding of the cross suggest that, in pre-Conquest England, at least, the linking of word, image, and performance joined the physical and spiritual, the temporal and eternal, and the earthly and heavenly in the Anglo-Saxon imaginative landscape.

This volume is divided into three sections. The first section of the collection focuses on representations of “The Cross: Image and Emblem,” with contributions by Michelle P. Brown, David A. E. Pelteret, and Catherine E. Karkov. The second section, “The Cross: Meaning and Word,” deals in semantics and semeology with essays by Éamonn Ó Carragáin, Helen Damico, Rolf Bremmer, and Ursula Lenker. The third section of the book, “The Cross: Gesture and Structure,” employs methodologies drawn from archaeology, new media, and theories of rulership to develop new insights into subjects as varied as cereal production, the little-known Nunburnholme Cross, and early medieval concepts of political power.

Cross and Cruciform in the Anglo-Saxon World: Studies to Honor the Memory of Timothy Reuter is a major collection of new research, completing the publication series of the Sancta Crux/Halig Rod project. Cross and Culture in Anglo-Saxon England: Studies in Honor of George Hardin Brown, Volume 2 in this series, remains available from West Virginia University Press.

“This volume makes valuable contributions and should appeal not only to Anglo-Saxonists but also to those with interests in early medieval intellectual and cultural history, liturgy, and iconography.”
Nicole Guenther Discenza, University of South Florida