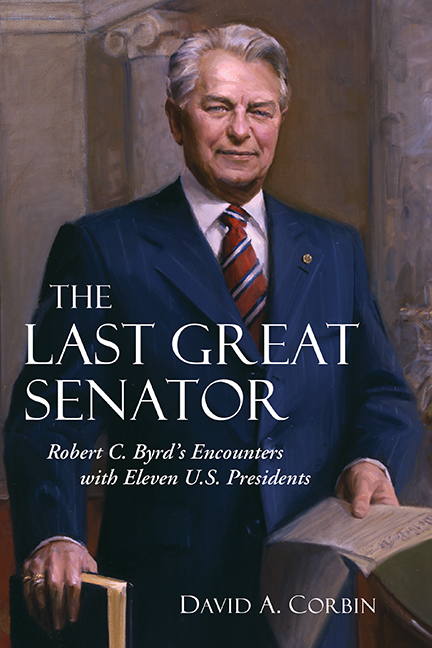 No person involved in so much history received so little attention as the late Robert C. Byrd, the longest-serving U.S. senator. In The Last Great Senator, David A. Corbin examines Byrd’s complex and fascinating relationships with eleven presidents of the United States, from Eisenhower to Obama. Furthermore, Byrd had an impact on nearly every significant event of the last half century, including the Cold War, the civil rights movement, the Vietnam War, Kennedy’s New Frontier, the Watergate scandal, the Reagan Revolution, the impeachment of President Clinton, and the Iraq War. Holding several Senate records, Byrd also cast more votes than any other U.S. senator.

In his sweeping portrait of this eloquent and persuasive man’s epic life and career, Corbin describes Senator Byrd’s humble background in the coalfields of southern West Virginia (including his brief membership in the Ku Klux Klan). He covers Byrd’s encounters and personal relationship with each president and his effect on events during their administrations. Additionally, the book discusses Byrd’s interactions with other notable senators, including Lyndon B. Johnson, Richard Russell, Mike Mansfield, and especially Robert and Edward Kennedy. Going beyond the boundaries of West Virginia and Capitol Hill, The Last Great Senator presents Byrd in a larger historical context, where he rose to the height of power in America.

David A. Corbin served as a Senate staffer for twenty-six years—six years on the leadership staff of Senate majority leader Byrd and ten years on the leadership staffs of Senate majority leaders George Mitchell and Tom Daschle. He also served as Senator Byrd’s speechwriter for the last ten years of his career. Corbin is the editor of The West Virginia Mine Wars: An Anthology and the author of Life, Work, and Rebellion in the Coal Fields: The Southern West Virginia Miners, 1880–1920. He received his PhD in history from the University of Maryland and lives in Annapolis.

“Sen. Robert C. Byrd was my predecessor as the majority leader of the U.S. Senate. When he cast his twelve thousandth vote in the Senate, I stated, ‘There are few honors greater than to be able to say that we served in the U.S. Senate with Robert Byrd.’ Now David Corbin has produced this much-needed account of Byrd’s life and career: how he embodied the Senate as an institution, how he was a powerful reminder to presidents and senators of the need to abide by the Constitution, and how he was a crucial part of American history for more than a half century. And he always remained so proud of his southern West Virginia roots. This is an important story that needed to be told, and David tells it so well.”
Sen. George Mitchell (D-ME), former Senate Majority Leader

“In my Senate leadership lecture on July 14, 1998, I discussed how Sen. Robert Byrd and I made an agreement to work together to make the Senate operate smoothly and productively. ‘It was an agreement,’ I said, that ‘we never broke, not once in the eight years we served together as Republican and Democratic leaders of the Senate.’ Determined to document Byrd’s place in American history, David Corbin has detailed Senator Byrd’s incredible career and accomplishments by focusing on his encounters with the last eleven presidents. I hope this book will become a must read for people interested not only in Senator Byrd, but the U.S. Senate and the presidency. I thank David for putting this book together about my good friend and former colleague.”
Sen. Howard Baker (R-TN), former Senate majority leader

“From his beginning as a self-described ‘rustic boob from West Virginia,’ Senator Robert C. Byrd rose to become the mighty ‘conscience of the Senate’—one of the few brave enough to oppose George W. Bush’s unnecessary Iraq invasion. I was Byrd’s first press secretary when he entered the Senate in 1959 and am the current editor of the largest newspaper in West Virginia. From these unique perspectives, I have closely observed Byrd’s career, his six decades in Congress and his rise in political statute. David Corbin does a superb job of telling this important American story.
James A. Haught, Editor, The Charleston Gazette