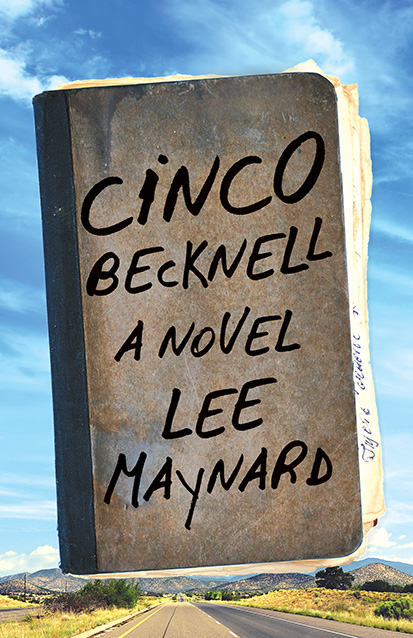 Cinco Becknell is the story of a homeless man with no memory. Locked in the emptiness of his mind is a secret, a past, which will either keep him alive or get him killed.

As Cinco staggers through a dangerous journey of rediscovery, he is hunted by psychopaths who want to kill him, and he has no idea why; he is shadowed by a woman who may keep him alive—or not; and he is finally helped by another woman who can bring back to him the light he looks for—if he can stay alive. But he is running out of time, and people around him are dying, always violently.

Gradually, he begins to understand the true, brutal, nature of himself and of the darkness of his past. But it is a past, and a present, that he may never fully understand.

This novel, based on generations of violent, local family history, is set in the underbelly of the pseudo-glitzy streets of Santa Fe, New Mexico.

Lee Maynard was born and raised deep in the mountains of West Virginia, a location that drives the emotion and grit of most of his writing. He says he has never had a “career.” Rather, he sought out “day jobs” while doing his real job—writing. Among several other things, he has been a criminal investigator, college president, and COO of a national experiential education organization. He now lives and writes at the edge of an Indian reservation in the high desert of New Mexico. He is the author of The Pale Light of Sunset: Scattershots and Hallucinations in an Imagined Life and the Crum trilogy: Crum, Screaming with the Cannibals, and The Scummers.

Lee Maynard would like to thank Arlo Chan, editor/concept editor, for his help in developing this book.

"A fictional mélange that's part thriller and part social commentary, set against the beautiful scenic backdrop of the southwest—and it works. Maynard begins with a timeline of 400-plus years of historical and fictional Santa Fe, New Mexico. William Becknell blazed the original ruts of the Santa Fe Trail in 1821—history. Cinco Becknell, the fifth William, is homeless on the streets of Santa Fe in current time—fiction. He wakes up in El Paso and has no memory of who he is or why he's there. He uses a bus ticket to Santa Fe from his shirt pocket to illuminate the flashbacks he's having of torture, pain and the old scars on his body. Little Jimmy befriends him on the streets and teaches the tricks of survival—how to get food, where to sleep, how to move through the city like a ghost. Jimmy names him Stick, the only name Cinco knows, and they both run from two psychopaths who need to silence Jimmy, who saw them brutally dispose of a woman in the desert night. There's also another person shadowing Cinco's movements—an elegant, mysterious, lethal black woman who calls him Pyat and is a connection to some dark pieces of a Russian memory. A lovely woman from Cinco's teenage past, Elena, sister of one of three boys whose photograph hangs in her gallery, begins to see the Cinco she knew from the photo in this beaten shadow of a stick man, and a love story sneaks into the action. Maynard is a consummate storyteller, and the thriller elements run parallel to the tough life of the homeless on the streets of The City Different."
Kirkus Reviews