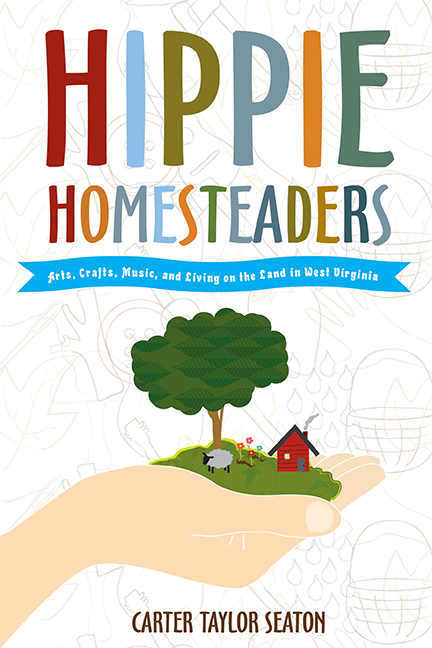 It’s the 1960s. The Vietnam War is raging and protests are erupting across the United States. In many quarters, young people are dropping out of society, leaving their urban homes behind in an attempt to find a safe place to live on their own terms, to grow their own food, and to avoid a war they passionately decry. During this time, West Virginia becomes a haven for thousands of these homesteaders—or back-to-the-landers, as they are termed by some. Others call them hippies.

When the going got rough, many left. But a significant number remain to this day. Some were artisans when they arrived, while others adopted a craft that provided them with the cash necessary to survive. Hippie Homesteaders tells the story of this movement from the viewpoint of forty artisans and musicians who came to the state, lived on the land, and created successful careers with their craft. There’s the couple that made baskets coveted by the Smithsonian Institution’s Renwick Gallery. There’s the draft-dodger that fled to Canada and then became a premier furniture maker. There’s the Boston-born VISTA worker who started a quilting cooperative. And, there’s the immigrant Chinese potter who lived on a commune.

Along with these stories, Hippie Homesteaders examines the serendipitous timing of this influx and the community and economic support these crafters received from residents and state agencies in West Virginia. Without these young transplants, it’s possible there would be no Tamarack: The Best of West Virginia, the first statewide collection of fine arts and handcrafts in the nation, and no Mountain Stage, the weekly live musical program broadcast worldwide on National Public Radio since 1983.

Forget what you know about West Virginia. Hippie Homesteaders isn’t about coal or hillbillies or moonshine or poverty. It is the story of why West Virginia was—and still is—a kind of heaven to so many.

Carter Taylor Seaton is the author of two novels, Father’s Troubles and amo, amas, amat . . . an unconventional love story, numerous magazine articles, and several essays and short stories. She has directed a rural craft cooperative, was nominated for the Ladies Home Journal “Women of the Year 1975” award, and ran three marathons—Atlanta, New York City, and Marine Corps—after she was fifty. A ceramic sculptor living in Huntington, West Virginia, she is a 2013 Tamarack Foundation Fellowship winner, an award given to artisans in recognition of their lifelong achievement in the arts.

“Outstanding. This story has come nowhere near being told with such depth and breadth until now.”
Paul Salstrom, author of Appalachia’s Path to Dependency: Rethinking a Region's Economic History, 1730-1940

“You don't have to be born here to be a West Virginian.

“West Virginia takes people in and makes them her own, as truly her children as any in the history of the state.

“And that is what this book is about—about people who came to West Virginia in the late sixties and early seventies, people who came as pilgrims come—to a warm hearth, seeking the companionship of welcoming souls, the safety of the enfolding mountains, and the comfort of friends who encourage growth and creativity.

“These people did not start out to be West Virginians. In a time when young people were fleeing West Virginia to the clutter, press, and numbing dullness of big city factories, others were arriving. Others, who started out to be something else and the world interfered. They found themselves in a universe not of their creation and not of their liking. Perhaps West Virginia truly was not a part of that universe.

“And so they came.

“Hippies. And they were. On the surface. Young people with their bandanas, T-shirts, ragged shorts, and sandals. Hippies, yes, but, in this book, not hippie caricatures. Carter Taylor Seaton’s writing does not allow that. Ms. Seaton knew that to see them only on the surface was a mistake and a disservice to their contributions to the state they chose as home. These were, and are, real people with real depth and real lives, not people easily described and categorized. They are complex, varied, and as multi-talented as any group could possibly be. Using only the talents they brought with them, they sought, and created, riches that are beyond the reach of most of us. These are people who created to live. And, eventually, lived to create.

“And West Virginia should be extremely proud of Carter Taylor Seaton.

“This book was waiting to be written, and perhaps only Ms. Seaton could have written it. Her clear, direct prose is, perhaps, the only prose that is appropriate for this story. Her own creative background and her historian’s grasp and presentation of the details, moods, and unrest of the times take the book far beyond a mere description of arts and crafts, providing a marvelous addition to the understanding of what makes West Virginians the people they really are.

“Ms. Seaton's writing, like these people, is a treasure.”

Lee Maynard, author of the Crum Trilogy: Crum, Screaming with the Cannibals, and The Scummers and The Pale Light of Sunset