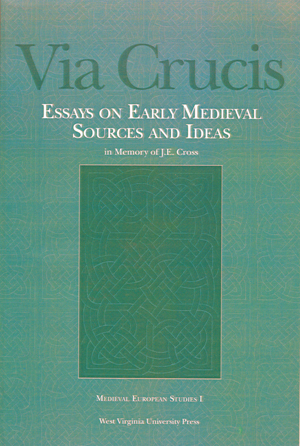 This book originated as a series of papers delivered at a Symposium on Irish and Anglo-Saxon Literary Culture in Honor of J. E. Cross, held in conjunction with the 30th International Congress on Medieval Studies at Kalamazoo in May 1996. The purpose of that symposium was to bring together a number of friends and admirers of Professor Cross to celebrate his remarkably rich career as a scholar of Old English and Insular Latin literature; Anglo-Saxon manuscripts; and medieval sermons, saints’ lives, and apocrypha.

Just over a decade earlier, a group of colleagues had honored Professor Cross with a Festschrift published as a special volume of Leeds Studies in English, but in the years since that collection appeared, Professor Cross had managed to launch into the most productive period of his entire career, producing over thirty new articles and books since 1984, including his ground-breaking monograph on the Pembroke 25 homiliary, a facsimile edition of the Copenhagen Wulfstan manuscript for the series Early English Manuscripts in Facsimile, a book on the Gospel of Nicodemus and Vindicta Salvatoris apocrypha from the St Omer 202 homiliary, and an edition and translation of Archbishop Wulfstan’s canon laws.

Surely these achievements were worthy of fresh recognition, we reasoned, and a small cohort of Professor Cross’s friends accordingly began conspiring to host a symposium in his honor with an eye toward producing a second Festschrift. Kalamazoo was the logical site for this event. Professor Cross had frequented the Medieval Congress at Kalamazoo for as long as any of us could remember, had chaired and presented in numerous sessions, and was a plenary speaker in 1990. It was also at Kalamazoo that Professor Cross initiated discussions of a plan to revise and update J. D. A. Ogilvy’s Books Known to the English, 597-1066, an ambitious project that has since given rise to two large collaborative ventures to which many Anglo-Saxonists around the world now contribute: Fontes Anglo-Saxonici and Sources of Anglo-Saxon Literary Culture.

Kalamazoo was thus a perfect match for Professor Cross, and with the kind indulgence of the Medieval Congress program committee, we proceeded to organize five sessions for the 1996 meeting on Irish and Anglo-Saxon studies as a tribute to Professor Cross’s work in these areas. The timing, as it turned out, proved meaningful: Professor Cross died unexpectedly the following December, just seven months after the symposium, and the Kalamazoo conference was consequently the last opportunity most of us had to see him.

"Scholars in the field of medieval studies will fund much to admire in Via Crucis, and some of the chapters... are extraordinarily solid, incisive, and memorable and will no doubt be much cited. In all, the book is a fine and fitting tribute to the memory of a distinguished scholar."
Kirsten Wolf, Journal of English and Germanic Philology